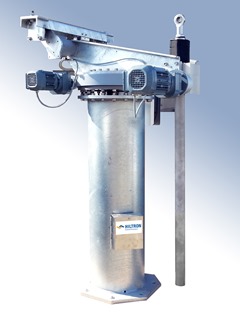 "Produced for two-way VSAT communication or receive-only downlink applications, Super-HMAM was originally developed for a major German customer and is now being added to our catalogue," comments Hiltron Managing Director Jan Molter. "It accommodates satellite transmission antennas of up to 4.9 metres diameter compared with the 2.7 metre maximum antenna capacity of the standard HMAM. Integral to Super-HMAM is a newly developed support structure which can survive the storm conditions experienced at high-altitude relay and transmission locations where wind speeds can exceed 200 kilometres per hour. All models in the HMAM range provide full motorised control of x and y axes as well as transmission beam polarity."

Like the standard HMAM, Super-HMAM can be controlled via an IP link from a PC running a graphic user interface compatible with standard web browsers. The control GUI displays all the information required to set and maintain azimuth, elevation and polarisation, including current position and target position plus a database of potentially accessible satellites. Once a satellite is selected, precise access parameters can be calculated at the press of a single button.

The Super-HMAM antenna control unit and associated motor-control electronics are contained in an IP65-rated weatherproof outdoor housing with a hinged front-access port secured by dual key screws. An emergency cut-off switch is easily accessible. Above the housing is a resolver which is used to measure the azimuth angle of the antenna. An identical second resolver allows constant monitoring of antenna elevation. Azimuth and elevation drive motors each operate through a reduction gear.

The entire antenna support system is built to withstand standard atmospheric pollutants and to operate at humidity levels of zero to 95 per cent over a temperature range from minus 25 degrees up to 35 degrees (optionally 55 degrees) Celsius. Additional protection can optionally be provided to withstand pollutants such as salt encountered in coastal and industrial areas. The rotating pedestal mount is made of corrosion-resistant hot-dip galvanised steel.