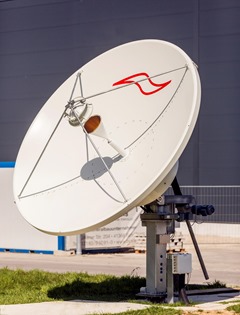 Backnang, Germany, August 6, 2014: Scheduled for introduction on the Hiltron stand (4.B89) at the 2014 International Broadcasting Convention in September, the new HANT C-Ku is a high quality 3.7 metre antenna for professional satellite signal monitoring or receive-only services.

A closely integrated feed system enables the HANT C-Ku to receive simultaneously the two linear polarised Ku band signals and the circular or linear polarised signals in C band. With a motorised polariser, the feed can be switched in C band between linear and circular polarisation. Thus, the total receivable bandwidth is up to 5.6 gigahertz. These sources can be converted to six independent L band outputs.

Hiltron's HANT C-Ku has a very wide range of applications including satellite performance assessment, digital newsgathering and cable-network head-ends. It provides reliable and accurate positioning far beyond the stability of commercial grade actuator devices. The very high rigidity of the HANT C-Ku's construction ensures absolute minimum backlash. It can operate in winds of up to 125 kilometres per hour and survive storm conditions of up to 200 kilometres per hour.

The antenna is designed for IP-based control from a PC running a graphic user interface compatible with standard web browsers. The control GUI displays all information required to set and maintain azimuth, elevation and polarisation, including current position, target positions and a database of potentially accessible satellites. The same GUI can be used to select polarisation, the beacon-tracking receiver and the signal source matrix.

Antenna control unit and associated motor-control electronics are contained in an IP65-rated weatherproof outdoor housing with a hinged front access port secured by dual key screws. An emergency cut-off switch is accessible to the left of this housing. Above the housing is a resolver which is used to measure antenna azimuth angle. A second identical resolver allows constant monitoring of antenna elevation. Azimuth and elevation drive motors operate through a reduction gear.

The HANT C-Ku is built to withstand standard atmospheric pollutants and to operate from zero to 95 per cent humidity over a temperature range of 35 (optionally 55) down to -25 degrees Celsius. The entire system can be specified to withstand pollutants such as salt encountered in coastal and industrial areas. The rotating pedestal mount is made of corrosion-resistant hot-dip galvanised steel.

Options for the Hiltron HANT C-Ku downlink antenna include a satellite tracking system, inclined orbit tracking, integration of parabolic reflectors according to customer preference, a handheld control unit, de-icer, and a choice of standard steel mounts or non-penetrating mounts.