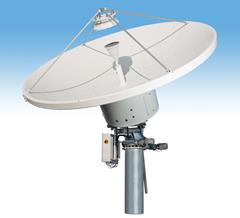 Hiltron announces the completion of a satellite communication project at a major teleport in Latvia. A combined endeavour with Danmon Group Sweden, the project includes a five-channel satellite link which will carry television content to Europe from the 2016 Summer Games in Rio de Janeiro. Central to the contract is the provision and integration of 3.6 metre satellite dish on an HMAM motorised mount plus a Hiltron HACU antenna control unit and an HDCU-E ice-sensing and dish heating system.

Part of the Hiltron SORBAS product family, HMAM is a high-precision motorised satellite antenna mount designed for two-way VSAT communication or receive-only downlink applications. It can be used for a wide range of applications including broadcast and telecommunication downlinks. An optional motorised feed changer allows the head to be moved quickly to a new position for switching between frequency bands. HMAM comes complete with professional-grade drives for azimuth and elevation plus a high-accuracy polarisation drive. The combined head and drive form a three-axis motorised mount with 180 degrees of azimuth adjustment, 90 degrees of elevation adjustment range and fully adjustable polarisation.

Hiltron's HACU is designed to control three-axis motorised antennas. The antenna control unit and associated motor-control electronics are contained in an IP65-rated weatherproof outdoor housing with a hinged front access port secured by dual key screws. The HACU can be operated from a PC running a graphic user interface compatible with standard web browsers. The control GUI displays all the information required to set and maintain azimuth, elevation and polarisation, including current and target positions plus a database of potential accessible satellites.

The Hiltron HDCU-E is a combined ice-sensing and dish heating controller for use with large satellite antennas. It is capable of handling up to 450 kilowatts of power across multiple heating groups. Each group is divided into three independently-controlled heater arrays. Each array in turn feeds up to three antenna heater circuits. A four-group configuration, for example, allows control of 12 arrays addressing a total of 36 heating circuits. This modular control approach permits easy configuration of parameters such as antenna size, number of heater pads and the power requirement of each pad.  Snow detection is via a reflective sensor with a polarising filter. Each heater circuit is individually supervised and controlled via user-adjustable minimum and maximum thresholds. Sequential switch-on is performed within the controller to prevent rapid changes in current load when the antenna heating process is activated or deactivated. Sequence timing is user-configurable.

Danmon Group Sweden AB (www.danmon.se) was founded in 1987 and has become a major supplier to the Swedish broadcast market with deliveries both to large and small companies. The company's activities include design, installation, technical service and support of professional TV and film and postproduction companies and telecommunication service-providers. Danmon Group Sweden AB also works in markets such as industry, defence, municipalities and county councils.

Hiltron GmbH (www.hiltron.de) is a globally active system integrator, manufacturer and distributor in the field of satellite and wireless communication. The company operates from modern purpose-built headquarters at Backnang near Stuttgart. On-site facilities include a large technical operations area with high access doors and ceiling, capable of accommodating satellite link vehicles and their roof-mounted antennas. Hiltron is part of the Danmon Group, one of Europe's leading suppliers of audio, video, transmission products and digital media solutions.