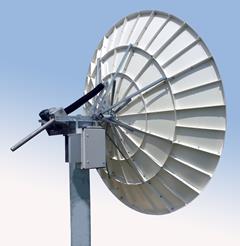 "RTE's engineering managers were wowed by the speed and precision of the HMAM," comments Libirel Communications' owner Declan Goulding. "They were also impressed by the compactness of the HMAM, fully prewired and ready for easy installation and connection to the Network.

"We have installed the motorised antenna system in the teleport at RTE's Donnybrook headquarters and connected it to the central L-band router via a 250 metre fibre link. The system we have provided includes a step-track function using satellite beacon."

The control interface is connected to the HACU via standard Ethernet and the HMAM is configured for operation from the master control room. We have also provided a Hiltron handheld controller which plugs directly into the HMAM drive electronics."

Developed and produced by Hiltron, HMAM is a high-precision motorised satellite antenna mount designed for two-way satellite  communication or receive-only downlink applications. It can be used for a wide range of applications including broadcast and telecommunication downlinks. An optional motorised feed changer allows the head to be moved quickly to a new position for switching between frequency bands.

The HACU can be operated from a PC running a graphic user interface compatible with standard web browsers. The control GUI displays all the information required to set and maintain azimuth, elevation and polarisation, including current and target positions plus a database of potential accessible satellites.

Declan Goulding is one of Ireland’s leading video and audio solutions engineers. After graduating, he started his long television industry career with RTE. A ten year spell followed at Windmill Lane Pictures.

After projects in Ireland, including the introduction of broadcasting facilities to the Irish Parliament, work moved farther a ﬁeld, to the Far East. In Hong Kong, work was carried out for Star TV and ABN among others. Subsequent projects have been carried out in Eastern Europe, Northern Africa and England.

Hiltron is part of the Danmon Group (www.danmon.com), one of Europe's leading suppliers of audio, video, transmission products and digital media solutions. With offices in Asia, Denmark, Germany, the Middle East, Norway, Portugal, Spain, Sweden and the United Kingdom.