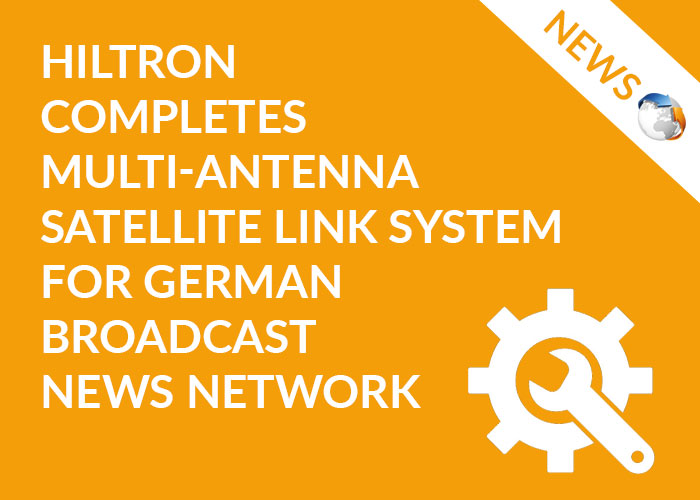 Backnang, Germany, May 25th, 2021 – Hiltron Communications, a globally active satellite system integrator, manufacturer and distributor, announces the completion of a satellite uplink and downlink system for one of Germany's largest television news broadcasters. The project includes six antennas and related control infrastructure which will be used to communicate with the network's associate organisations around the world.

"Following successful acceptance, we created a solution which integrates fully into the news production workflow," says Hiltron managing director Antonio Monteverde. "Easy and efficient operation were essential requirements. The antennas are located on a city-centre rooftop earth station and operated via remote links from the network's master control room. Hiltron software allows the system to be supervised via a single browser-based display screen showing all relevant performance parameters, confidence lights and alerts. Most important of all, de-icers in the antenna panels can be activated automatically if the rooftop temperature creates any risk of freezing."

"All six of the new antennas will be used to capture incoming signals", details Hiltron project manager Guy Van Bambeke. "Five of the reflectors are from General Dynamics, one being 3 metres in diameter and four being 3.7 metres. The sixth is a 2.7 metre Laminas dish which we have equipped to capture simultaneous feeds from three orbital positions, in this case 7 degrees east, 13 degrees east and 19.2 degrees east. Each antenna is on a fixed mount. 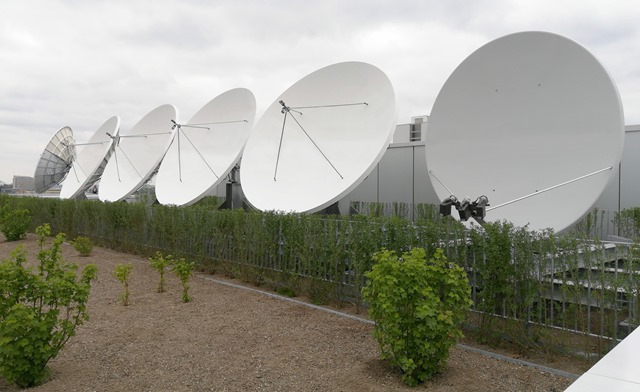 "We have also refurbished three existing antennas which will function both as uplinks and downlinks. That part of the project included the provision and integration of Hiltron ACU antenna control units which are used to control the dish azimuth and elevation. Each comprises a standalone unit contained in a weatherproofed outdoor housing, remotely operated via an IP data stream from a standard PC. Once a satellite is selected, precise access parameters can be determined by pressing a single button.

"Last and not least, we have integrated 13 Swedish Microwave low noise block downconverters. These are high-performance units which ensure the received data conforms fully to broadcast specification."

Hiltron ACU antenna control units are designed to control three-axis motorised antennas. The antenna control unit and associated motor-control electronics are contained in an IP65-rated weatherproof outdoor housing with a hinged front access port secured by dual key screws. Each control unit can be operated from a PC running a graphic user interface compatible with standard web browsers. The control GUI displays all the information required to set and maintain azimuth, elevation and polarisation, including current and target positions plus a database of potential accessible satellites.

Hiltron Communications (www.hiltron.de) is a globally active system integrator, manufacturer and distributor in the field of satellite and wireless communication. The company operates from modern purpose-built headquarters at Backnang near Stuttgart. On-site facilities include a large technical operations area with high access doors and ceiling, capable of accommodating satellite-link vehicles and their roof-mounted antennas.